Divine was only an infant when she was placed in an orphanage. Despite having nothing while growing up, Divine grew up to be an optimistic one. She was friendly, outgoing and had a strong and spontaneous demeanor. On her 18th birthday, the day she got ready to venture out into the world on her own, she was given a ring and a letter by her caretaker. The ring had an engraving of the word Elaina on it and the letter told Divine that she in fact had a younger twin sister. They had been forced to be kept apart but now that she was grown up, she could go and find her long lost sister. Divine set out on her journey and after searching high and low, scanning the crowds of different towns for her sister, she finally found her. On the edge of a town buried in snow, lived a girl in a peaceful little hut. She wouldn't leave the house and when asked about it, she would always say she's waiting for her Divine, having already known about her sister before her. Divine was finally reunited with her sister and it was her need to be loved and have the warmth of her family that always kept her searching and brought the two together. The beauty of the ring owned by Divine has been recaptured in our ring, named after her as well. This ring is a cousin to our Elaina Ring, except with a generous diamond planted in the center. It's more beautiful in person. This ring will have you orbiting in love with it's diamond circlet of crystals framed by two rows of CZ diamond stones, with a gorgeous larger diamond placed in the middle on top of a 14k gold vermeil or a 925 sterling silver base. Wear our Divine ring and feel her hopeful and warm nature surge through you.

Free Worldwide Shipping on orders over $75. 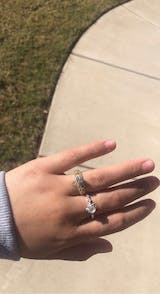 Absolutely obsessed! so many complements! Makes the prefect promise ring!

A
Audrey (Swainsboro, US)
Very pretty

It's a very pretty ring. High quality and very sparkly. I'm no expert but it looks a lot like a diamond to me

We love the service and commitment

Extraordinary & irresistable.
Top-rated jewelry for everyone.

Handpicked the best of stones, handcrafted to perfection.
Go on, treat yourself.