Have you ever seen something so beautiful that you felt the air has been sucked out of you and all you can feel is marvel and sensations of all the joy in this world? That is what the sight of an Emerald did to The Prince of The Northern Vale. As a child, he heard multiple stories about how green and vibrant the grass and trees looked elsewhere and longed to see them all his life. Rumor had it that long ago an evil and jealous witch had stripped the land’s nature of all its color because the ancient King of The Vale refused to marry her. Now the prince vowed to restore his land in its former glory. He needed to prove himself worthy to his people. It was said that the witch stored all the land’s colors in a crystal gem, called the Emerald. Even a mere glance on the emerald from someone with royal blood would break the curse. The prince spent several months, battling barriers and monstrous creatures until he made it to the cave where the emerald resided. The prince was sharp and managed to dodge all obstacle and cast his eyes upon the gem. When he did he found himself trapped into a spell binding trance. The beauty had bewitched him. Such vibrancy, such grace and beauty had never been seen before and although the brave prince broke the witch’s curse, he was unable to pry his eyes off of the magical stone for the rest of his days.Our Emerald Green Double Chain Choker won’t let your eyes dart away from it for even a second when it’s in your possession. The brilliant deep green stone looks like a sea of magic and beauty when observed closely. The 13” inches with 3” inch adjustable extender chains are premium brass with the options of being either, a shining silver with both palladium and platinum filling, or, a gold with 14k gold filling.

Free Worldwide Shipping on orders over $75.

This necklace is way nicer than I expected somehow... It's so beautiful. The quality is great, it's a nice solid chain and looks so elegant. I love it!!

A
Anna M. (West Palm Beach, US)
So many compliments

I get compliments on this almost every time I wear it. Classy, feminine, lovely.

WOW i waited months for this necklace to come back into stock and it was so worth the wait. It arrives in great packaging, I appreciated getting the necklace box for it. The chain work is beautiful and the gem is just perfect. My birthstone is emerald so this was a MUST have. I can't wait to show it off!

I love the necklace it's perfect!

I loved the pieces I received! They are great quality and so gorgeous. I do have a bit smaller of a neck so they are looser on me but are still pretty either way!

Just received my necklace it’s so beautiful, would come back again to shop for more 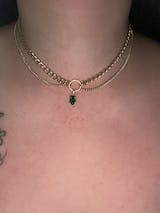 Extraordinary & irresistable.
Top-rated jewelry for everyone.

Handpicked the best of stones, handcrafted to perfection.
Go on, treat yourself.